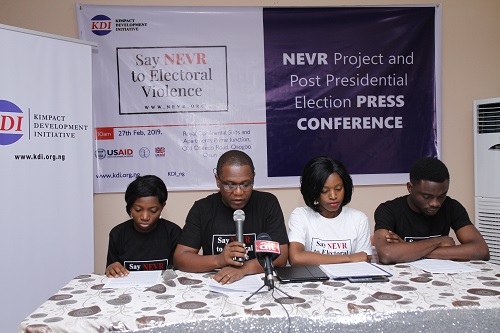 A PRESS STATEMENT BY KIMPACT DEVELOPMENT INITIATIVE, THE PROJECT COORDINATOR FOR NIGERIA ELECTION VIOLENCE REPORT (NEVR) SOUTH WEST HUB ON THE VIOLENCE AND POTENTIAL FOR VIOLENCE REPORT ON THE 23RD FEBRUARY, 2019 PRESIDENTIAL AND NATIONAL ASSEMBLY ELECTIONS

With great pleasure, we welcome you to this press conference organized by Kimpact Development Initiative (KDI) in respect to the Nigeria Election Violence Report (NEVR) Project for the 2019 General Elections. The objective of this press conference is to inform the general public and major stakeholders on the key findings and observations of the Kimpact on election violence report during the last Presidential and Federal House of Assembly election and to give recommendations based on the last election findings on the forth coming governorship and house of assembly election.

ABOUT ON NEVR PROJECT

The Nigeria Election Violence Report (NEVR) project is supported by the International Foundation for Electoral Systems (IFES). The project focuses on developing the capacity of civil society to monitor, analyze and respond to incidents of election-related conflict before, during and after elections in Nigeria. It encourages collaboration and dialogue between election stakeholders in society to mitigate and/or prevent election violence.

To achieve these objectives, IFES through Kimpact trained and deployed 106 monitors throughout South West geopolitical zone during the Pre-election, Election Day and Post-election periods.  Several peace initiatives such as advocacy visits and town hall meetings have been held in each state of the southwest to discuss with key stakeholders so as to mitigate political tensions that may lead to electoral violence. Over 6000 pledge cards were circulated and the commitment of the citizens to peacefully participate in the elections is still ongoing. 18 billboards bearing nonviolence messaging have been mounted across the 18 senatorial districts of the south west. A toll-free line (08000010000) has been made available as a medium where the public can also report any incident of violence in their communities.

As part of Kimpact Development Initiative’s effort to deepening democratic processes, a Kimpact/ NEVR South West Election Situation Room was setup for credible, real-time analyses that will become one of the most sought-after election information during and after the polls, for objective insights into incidence of election violence, document same and to provide rapid response to emergencies – especially in the crisis situation during and after the elections.

Firstly, commendation goes to the patriotic Nigerians who were committed and shown persistent determination to exercise their franchise on Saturday 23rd of February, 2019 going against all odds. KDI cannot but salute the members of the National Youth Service Corps who were resilient and unflagging in carrying out their duty despite the difficulties posed on their path.

Averagely, in most polling units of the South West Nigeria voting started somewhat around 10.30 am. There was even a report from Onile Aro, Ward 4, Akinyele LGA, Ibadan as at 2.50pm that accreditation and voting has not commenced. Delay in the starting time of polls was obvious in states like Ogun, Ondo and Lagos. The time lag in the starting time of voting impacted on the timely completion of the collation process.

LOGISTIC ARRANGEMENT FOR THE ELECTIONS

Saturday, 23rd February, 2019 election was branded with grave logistical issues which includes deployment, and adequacy of election materials. Report of an incomplete number of sensitive materials in most polling units at Ado-Odo, Ota and Shagamu in Ogun state, Irepodun in Osun State and some part of Ondo State were worrying. We got reports from some part of Oyo and Lagos that marker given couldn’t work well till the end of the exercise and the indelible ink provided got exhausted. Though some of these issues were later amended, but the delay this had caused to the commencement of polls cannot be repaired.

The issues around the smart card reader on the election day was worrisome, Report gotten from Ijoko, Ogun State, Ido and Egbeda LGA of Oyo State and some part of Lagos exposed instances where voting had to be paused due to technical and network issues on the SCR. This massively contributed to the delay experienced before and during the voting exercise which also caused delay in closing of polls.

CONDUCT OF THE AD-HOC OFFICERS

It was largely reported in Osun and Ondo state that the some of the ad-hoc officer displayed a bungling performance, as report came that even voters were suggesting solutions to officers in Osun state when some of them were overwhelmed with difficulties and apparent cluelessness. Many of these acts lead to delay in voting in some part of Ondo state.

All the aforementioned issues are potential for violence in the Saturday, 23rd February, 2019, getting reports on violence and disruption of the voting process by political thugs is very disheartening. We cannot but talk about the Election Security.

With sorrow of heart, Kimpact confirmed that two Nigerians died during the course of electoral violence on Saturday 23rd of February, 2019 in South West: Lagos – 1, Oyo- 1. KDI has repeatedly stated that no ambition of any politician is worth the life of any Nigerian and we strongly condemn the lack of empathy, care and sensitivity by the political class regarding these cases.

Report gotten depicts that in most places where polls were disrupted have just one security man in attendance, which means areas that are volatile were not taken into consideration during the deployment of security officers and this had gross consequences on the election.

For example, In Iba, Ifelodun, Osun State, Voters, Ad-hoc staff and the only security agent who reportedly was said to be a Female Federal Road Safety Officer had to run when suspected political thugs started shooting and scattered the polls.

In Egbeda, Ibadan there were reports of snatching of ballot boxes. There was disruption of voting by suspected party thugs in Kudeti Area of Ibadan South LGA, where one death was recorded.

In Oriade, Osun State, ballot papers and boxes were destroyed at the INEC office.

In Okota, Lagos State, there were reports of disruption of voting by suspected political thugs who when shooting in the air, voters were chased away, ballot boxes destroyed and ballot papers were set on fire. We can’t throw this away, reports gotten basically showed that security personnel conducted themselves professionally, yet there are few examples where security officers were to some extent overzealous in the conduct of their duties.

CLOSURE OF POLLS AND COLLATION

Polls close extremely late, the report came in of officials in some polling unit using phone backlight to sort and count ballot paper, the report showed that in Iba, Ifelodun of Osun State, collation at the polling unit was still ongoing around 9.30pm.

Due to various degrees of concerns around logistics, smart card reader and issues that hinged on violence on Saturdays’ elections in South West Nigeria, Kimpact recorded issues that are significant and that INEC has not planned strategically despite the postponement of a week by the commission.

In view of the aforementioned issues, KDI recommends that: