With great pleasure, we welcome you to this press conference organized by Kimpact Development Initiative (KDI) in respect of the Nigeria Election Violence Report (NEVR)for 2019 Bayelsa State Governorship Election held on the 16th November 2019. The objective of this press conference is to inform the general public and major stakeholders on the key findings and observations of Kimpact on election violence report during the Saturday, November 16, 2019 Governorship election in Bayelsa State and to give recommendations based on KDI/NEVR Situation Room analysis.

The Nigeria Election Violence Report (NEVR) is a project coordinated by Kimpact Development Initiative (KDI) in Bayelsa State with the support of International Foundation for Electoral Systems (IFES). The project focuses on developing the capacity of civil society to monitor, analyze and respond to incidents of election-related conflict before, during and after elections in Nigeria. It encourages collaboration and dialogue between election stakeholders in society to mitigate and/or prevent election violence.

To achieve these objectives, KDI assessed the electoral risk factors in the eight (8) local governments of Bayelsa State ahead of the 2019 gubernatorial election with a view to explore non-violence expectations of the election, examine real and potential security threats in the zone so as to identify early warning signals that could assist relevant stakeholders, especially INEC, security agencies and civil society organisations (CSOs) to deploy appropriate responses.

From the survey, 51.77% of the respondents foresaw a peaceful governorship election while 48.23% expected electoral violence.The possibility of violence was unlikely in Kolokuma/Opokuma local government while Sagbama, Yenagoa and Ogbia were projected to somewhat experience electoral violence. However, the remaining four (4) local governments: Ekeremor, Southern Ijaw, Nembe, and Brass had a high tendency of experiencing violence.Also, from the analysis, party thuggery, vote buying and cultists’ clash topped the list of risk factors which could spark electoral violence. Furthermore, KDI and her trained monitors started tracking electoral violence related incidences and peace initiatives on the 23rd September 2019. For the pre-election period, up until Friday, 15th November 2019; KDI tracked, reported and documented forty-two (42) Peace Initiatives, twenty-three (23) Civic Education and Nineteen (19) Violence Incidences.

With the aforementioned indicators and statistics, KDI trained and deployed 16 monitors throughout the eight (8) Local Government Areas (LGAs) in Bayelsa state for the Pre-election, Election Day and for thePost-election days.  Several peace initiatives such as advocacy visits and town hall meetings were held at different locations and LGAs in Bayelsa State to discuss with key stakeholders so as to mitigate political tensions that may lead to electoral violence. Over 532 pledge cards were circulated and the commitment of the citizens to peacefully participate in the elections were gotten. 9 billboards bearing nonviolence messaging were mounted across the 3 senatorial districts of Bayelsa State. A toll-free line (08000010000) was made available as a medium where the public can also report any incident of violence in their communities.

KEY FINDINGS AND OBSERVATIONs OF KIMPACT ON INCIDENCE OF ELECTORAL VIOLENCE, POTENTIAL FOR VIOLENCE AND OTHER RELATED ELECTIONS HITCHES.

As part of efforts to deepen democratic processes, a Kimpact/NEVR Bayelsa Election Situation Room was set up for credible, real-time analyses for objective insights into incidence of election violence, document same and to provide rapid response to emergencies – especially in the crisis situation during and after the elections.

Firstly, commendation goes to the patriotic Nigerians in Bayelsa State who were committed and showed persistent determination to exercise their franchise on Saturday 16th November 2019 going against all odds. Kimpact cannot but salute the members of the National Youth Service Corps (NYSC) who were resilient and unflagging in carrying out their duty despite the difficulties posed on their path.  We express our sympathy for those (voters, election officers, security officers, observers, civil society members and the media) affected by the Pre-election Day and Election Day violence.

KIMPACT Informs the Public of its Bayelsa Pre-election Survey. 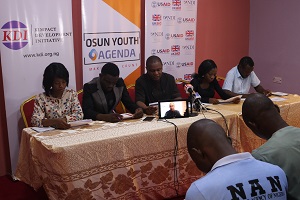