Building upon years of extensive groundwork in election violence monitoring and mitigation in Nigeria and preparing for the forthcoming November 6, 2021, governorship election in Anambra State, Kimpact Development Initiative (KDI) has concluded its first pre-Election Security Risk Assessment (ESRA) in the state. ESRA is predicated on the Nigeria Election Violence Report (NEVR) methodology, and the methodology was developed by the International Foundation for Electoral Systems (IFES). ESRA aims to engage an in-depth, holistic, and pre-election assessment of all factors that could give rise to election violence and or affect the electoral process in any given election, in which the forthcoming governorship election in Anambra state is not excluded.

The peculiarity of the study is situated within the context of the widespread violence, which has undeniably poked social, political, and economic tension across Nigeria. The southeast region of Nigeria is specifically brought into focus considering the increasing reports of the extreme attack on Nigeria’s electoral apparatus in the region. Since 2019, there are 14 states in Nigeria where 41 incidents of the violent destruction of INEC have been recorded. Most of the violent attacks and destruction of INEC facilities in 2021 have been in the southeast states, including Anambra.

Recognizing that violence has served as a historical instrument for inhibiting election success in Anambra and Nigeria, KDI researchers also focused on the changing dynamics of violence in the state and its potential adverse impacts on the November 6, 2021 election security. 700 respondents were drawn across 20 local governments of Anambra state and from diverse job fields via a random sampling method. Key informant interviews were also conducted to generate primary qualitative data. It is noteworthy to state that at the time of gathering the survey data, KDI could not elicit views from indigenes in Ayamelum LGA due to intense communal clashes that hindered field researchers.

The study confirmed a widespread perception of insecurity by state residents, and many indicated an extreme concern for both the election and public safety. Also, the study finds support for the claim that attacks by unknown gunmen are the major form of violence in the state, followed by attacks on security apparatus, kidnapping, communal clashes, farmer-herders clashes, and ritual killings. Considering this finding, the potential adverse effects of gun violence on the election process in Anambra are duly highlighted in the study.

Present Violence in Anambra is Unconnected from the forthcoming election.

An overwhelming majority (73%) of respondents affirmed that prevalent violence in Anambra State is nothing short of widespread violence, just like it is across other parts of the country. Respondent noted it is not connected to the forthcoming gubernatorial election in the state. However, it was pointed out that the violence has political undertones, which could transform into full-scale political violence when election campaigns commence.

Empirical evidence gathered by the study also highlighted that the widespread violence being witnessed in the state is majorly triggered by the daunting experiences resulting from youth unemployment, police brutality, poverty, and the secessionist agitations in the region. 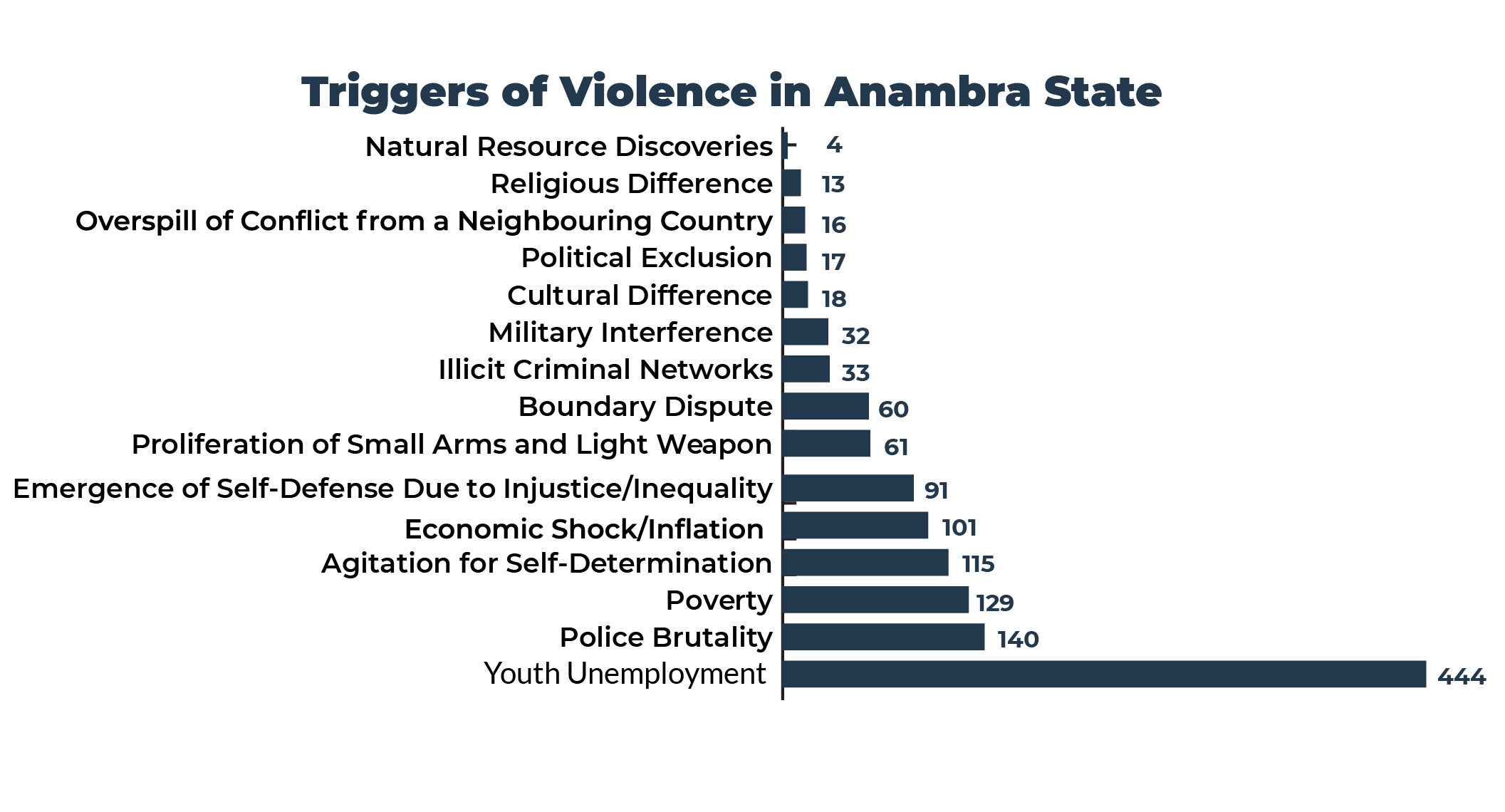 Residents of Anambra also indicated that we might not recoil from the possible effects of widespread violence from the forthcoming election, mainly because the damage being done to the security architecture and INEC facilities will have severe consequences for the election process. Findings also indicated an 83% chance that violence in the state would continue after the election if nothing definite and decisive is done to curb it.

The Effects of Violence on the Forthcoming Anambra State Gubernatorial Election.

The study suggests ways through which current violence in the state could further affect the forthcoming elections. For instance, data indicated that present violence would likely inhibit people’s interest in participating in the physical stage of the continuous voter registration (CVR) exercise. Also, two-thirds of respondents opined that there might be low voter turnout due to the preconceived notion that the election day might be full of violence.

This is far from the 84% of the respondents that expressed that they will not be comfortable going to the polls on election day due to the violent tension rocking the southeast region. Only 5% of the respondents expressed total confidence that they will be comfortable going to the polls. This finding has an impact on the projected possibility of a low voter turnout. This shows that more needs to be done by major stakeholders to restore the confidence of citizens to avert low turnout in the forthcoming governorship election.

Having examined the increasing agitation for secession in the region and the recent impact of secessionist forces on elections conducted in Anambra state, the report also made diligent recommendations for all relevant stakeholders.

KDI made further practicable recommendations. Get a copy of the full report to access more in-depth insights into the pre-election environment in Anambra state.