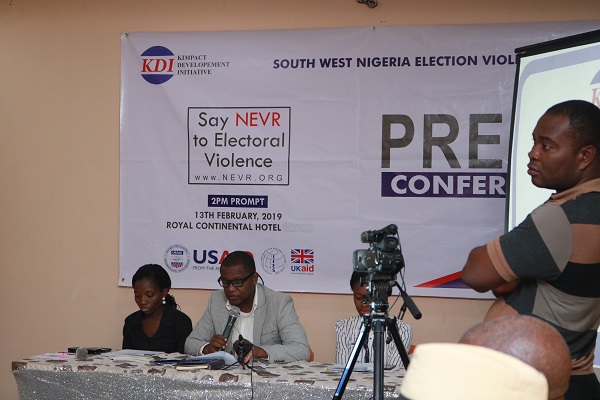 A PRESS STATEMENT BY THE SOUTH WEST HUB OF THE NIGERIA ELECTION VIOLENCE REPORT (NEVR) PROJECT TOWARDS THE 2019 GENERAL ELECTIONS.

With great pleasure, we welcome you to this press conference organized Kimpact Development Initiative (KDI) in respect to the Nigeria Election Violence Report (NEVR) Project for the 2019 General Elections. The objective of this press conference is to inform the general public on the key findings of the Kimpact pre-election survey/hotspot mapping done before the 2019 general elections, also to inform the public on how citizen observation/monitoring could help on mitigating electoral violence, share medium to report electoral violence in their communities, and to remind all electoral stakeholders to play by the rules at this critical stage of the electoral process most especially before, during and after the 2019 General elections.

About on NEVR Project

The Nigeria Election Violence Report (NEVR) project is supported by the International Foundation for Electoral Systems (IFES). The project focuses on developing the capacity of civil society to monitor, analyze and respond to incidents of election-related conflict before, during and after elections in Nigeria. It promotes collaboration and dialogue between election stakeholders in order to mitigate and/or prevent election violence.

To accomplish these objectives, IFES through KDI engage monitors throughout hotspot states in South West geo-political zone during the pre-election, Election Day and post-election periods.  KDI will also distribute public awareness materials and engage in public education during this process. This combination of activities will strengthen the partners’ ability to reinforce peace in their communities and to help prevent tensions from escalating into violence.

Kimpact Development Initiative’s commitment to deepening democratic processes incites her to embark on an assessment of electoral risk factors in the six states of the south west geo-political zone of Nigeria ahead of the 2019 general elections with a view to explore opinions, knowledge and non-violence expectations regarding 2019 general elections and also to examine real and potential security threats in the zone so as to identify early warning signals that could assist relevant stakeholders, especially the INEC, security agencies and civil society organisations (CSOs) to deploy appropriate responses. The pre-election survey had sample size of 2,722 respondents across South West gotten through a web-based experiment.

There are diverse degrees of concern in the 6 states of the south west with the 3 states on Amber: Ekiti, Ogun, Ondo, while Lagos and Oyo are the 2 states on Red based on the findings of the survey. The findings also suggest that Osun State could have a certain degree of peace in the forthcoming elections.

However, most persons (65.3%) in the south west Nigeria believes the election will be peaceful, but the bone of contention is the colossal amount (28.3%) that are uncertain about having peaceful elections due to issues around activities of political party leaders, political thugs, hate speech, partiality/low professionalism of security agencies and INEC Officials and unclear voting procedures.

With all these aforementioned concerns, providing impartial voice on electoral violence through citizen observation with the ultimate goal of ending the culture of impunity by documenting and publishing disaggregated electoral violence data is key and needed so as to inform relevant stakeholder on why election violence needs to be mitigated.

IFES through KDI have trained and deployed 106 monitors throughout hotspot local government areas in South West geo-political zone during the Pre-election, Election Day and Post-election periods.  Several peace initiatives such as advocacy meetings and town hall meetings have been held and still ongoing in each states of the south west to discuss with key stakeholders so as to mitigate political tensions that may lead to electoral violence. Over 6000 pledge cards will be circulated to get commitment of the citizens to peacefully participate in the 2019 general elections. 18 billboards bearing nonviolence messaging will be mounted across the 18 senatorial districts of the south west. A toll-free line (0800001000) would be made available as a medium where the public can also report any incident of violence in their communities.

As it is no more a news that the general election would be February 16 and March 2 for the presidential and governorship elections respectively. KDI hereby request all stakeholders: INEC, political parties, candidates, youth leaders, security officers and political gladiators to please ensure a peaceful atmosphere before, during and after the elections.

As citizens of this beloved country Nigeria, we like you all to bear in mind that no development is possible in the atmosphere void of peace. We implore all youth to please avoid being an instrument to foment violence in any area of the state as peace for one is peace for all.

We request that all candidates involved in the forthcoming elections should ensure a peaceful atmosphere for all by ensuring that all their followers are not going to be instrument to cause violence in any area of the state, and bear in mind that there is no blood of any Nigerians that worth their political ambitions.

We request that the security agencies should be impartial, fair and ensure justice in the discharge of their roles during the forthcoming election as any act of partisanship can jeopardize the peace in our country. Our statement is incomplete without requesting the media to be professional in their reporting bearing in mind that the people count on them for genuine unbiased reporting. In conclusion, we say thank you to all stakeholders as we hope for peaceful atmosphere before, during and after the general elections.

For the E-copy of this press statement

Last modified: February 13, 2019
← Previous Story: Budget for the Organization You Want to Be
→ Next Story: Press Statement by Kimpact Development Initiative on The Violence and Potential For Violence Reported On The Presidential And National Assembly Elections